I'm taking a leave of absence from regular gaming. I'm wrestling with a huge work project that is leaving me in a perpetual state of exhaustion, and regular weekly gaming just isn't working for me right now. I'm not giving up gaming altogether, but I am going to game fairly sporadically over the next few months to a year. One-shots here and there, the occasional short-term campaign, that sort of thing.

One of these short-term items I'm planning on is a Pits and Perils one-shot I plan to run for the small (and fairly sporadic) Wednesday Night group of +Tim Shorts  and +Ken H. I'm looking forward to doing that since P&P seems right up my alley – it's rules-lite, OD&D-esque, and comparatively low-powered. Adventure game over combat sim. Exploration of dungeon over exploration of character. You get the idea. 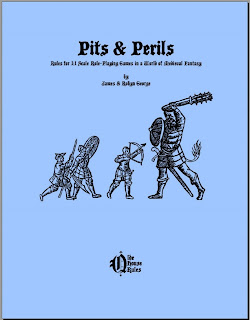 So looking forward to trying this.

I managed to save a LOT of time prepping my one-shot by cutting out all original mapping. That's right. I created none of the maps in the adventure. Having NO artistic ability, I am a lousy mapper by nature. Computer programs like hexographer, or various drawing programs generally help me a lot to create things that look nice, but even with their help, when I make up my own stuff from scratch, it takes a very, very (did I mention "very?") long time. To the point where I often spend more time on the maps than on the adventure or campaign content itself.

So for my P&P one-shot, I pillaged from other sources, all of which I heartily recommend, and which I'm listing below.

Donjon D20 Random Dungeon Generator: I've been using this for a long time now. I use it for the maps, without using the randomly generated content. I have not drawn a dungeon map since I discovered it. Most of the dungeon maps from my West Kingdom PbB campaign and all of the dungeon maps from my Ephemera campaign were created by this generator. Sure, I edit what comes out of the generator. Sometimes I want a particular flow to the way the corridors branch. Or maybe I want the walls on one side of the dungeon to be collapsed and have rough edges. Editing maps from here is fast and hassle-free. If you set the map style to "standard" it comes out in a basic black which is super easy to tweak. Just generate something bigger than you need. Then, on your own, use a painting or photo-editing program to black out the unneeded bits, rough up wall edges, whatever you need. Easy-peasy. 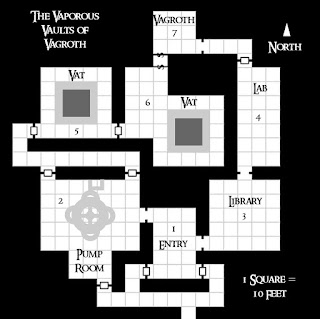 A donjon d20-generated map that I edited for my Ephemera campaign. The secret doors and 10' corridor between them, along with the vats and pumps, were simple add-ons I quickly edited in.

Judges Guild Resources: Village Books I & II, Castle Books I &II, Island Book I. All of these are available at DriveThruRPG and RPGNow. I never used Judges Guild materials in my earlier gaming incarnation (middle school through college). They weren't available in stores near me, and I only knew of their existence at all through magazine ads. While some of these may now look a bit dated for some people's taste, they do provide a large quantity of maps for a darned good price. Just as an example, the village books each have something like 48 maps in them, for $3.99. So I now have some 96 maps for $8. Basically, I will never have to draw another village map (or castle map, or island map) again as long as I live. That's a serious time-saving tool. 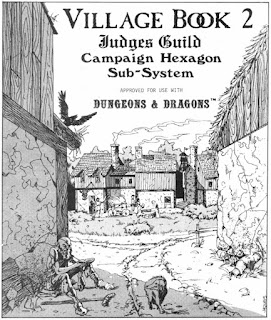 Kenzer & Co.'s City Map Folio for the Kingdoms of Kalamak Setting: This has about 30 city maps in it, in various shapes, sizes, and surrounding geography for $6.99 on DriveThruRPG and RPGNow. It's easy to edit too. Screen shot the page, then use a photo-editing program to switch the map to straight black and white, use a white-background text box to replace the Kalamak setting city name with one that suits your setting. Bam. Done. Or if the Kalamak setting names suit your campaign, just use them as is. Here again, I may never draw another city map again. I mean really, would I ever run a campaign area with more than 30 cities, even if I had all the time in the world? Probably not. 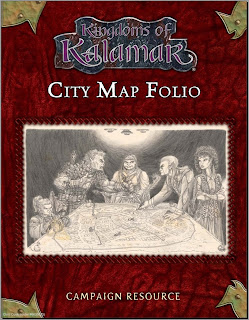 So, no from-scratch map-making for me. It's turning out to be a HUGE time-saver that will fit well with my heavy work-load and spotty gaming schedule.

Email ThisBlogThis!Share to TwitterShare to FacebookShare to Pinterest
Labels: Maps