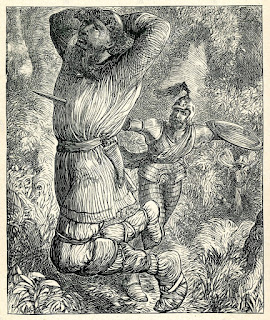 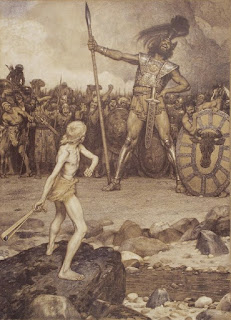 I mentioned in my last post how I was tweaking and reworking parts of my Ravensburg setting. Today I streamlined the city map. The old map had lots of redundancies in it: two separate market quarters, three run-down "tough" neighborhoods, two or three different artisans quarters, and so on, all of which made it unnecessarily harder to flesh out -- e.g. how's this market district different from that market district? And would that difference actually matter to players? In practice it never did, as far as I know. So I've redone the map, and cut it down, sticking more or less to one quarter per function that was on the old map (city governance, market, scholars and scribes, travelers inns and taverns, church for healing, bad neighborhood to go looking for trouble in, etc.). So Ravensburg now looks like this. 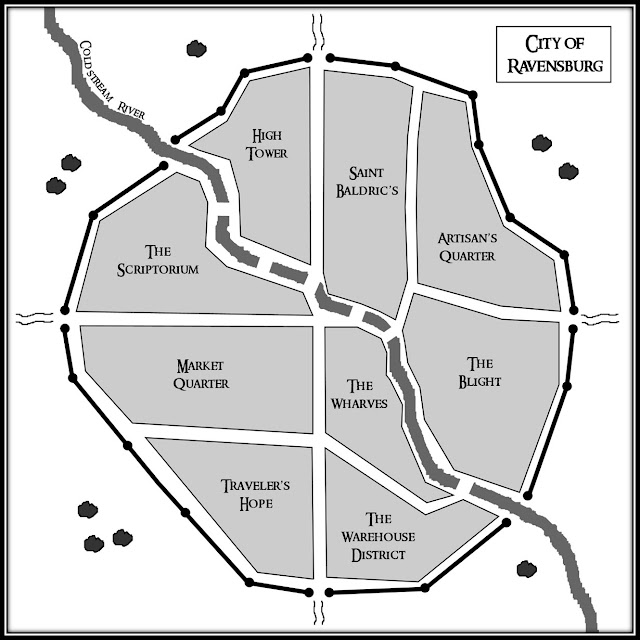 All the NPCs, factions and shops from previous games will all still be there. But I've cut out a bunch of unnecessary fluff separating them all geographically and making my prep tougher.
Posted by Chris C. at 6:41 PM 13 comments:

New Ravensburg Maps and Other Projects

Things have been slow on the gaming front this past year. A new job with tons more work has put a crimp in things. I've managed to keep playing regularly, but have not spent tons of time prepping or DM'ing. That said, I've been slowly, silently chipping away a few things in the background.

Ravensburg Revisions and Maps. Overall I've been happy with my Ravensburg setting. But I've never been quite satisfied with the overall broader world that serves as the setting's background, and I've always thought that the sandbox area around the city and the nearby Black Tower has always been a bit too small and confined. So I've been reworking these, tweaking the world, and expanding the immediate sandbox. 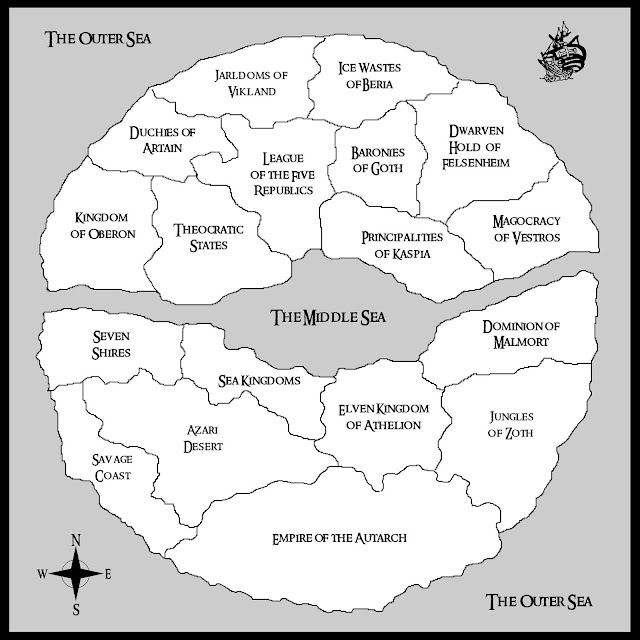 The world -- Ravensburg is in the League of the Five Republics. 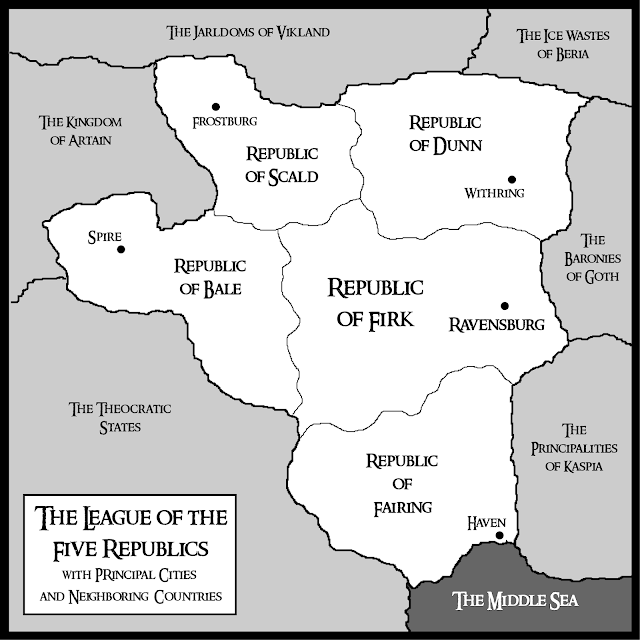 A close-up map of the League.

I've intentionally left the scale off of these maps for now. I'll probably create other small sandboxes around the world at some point in the future. Long-distance travel from one sandbox to another will happen "at the speed of plot" to quote Straczynski. 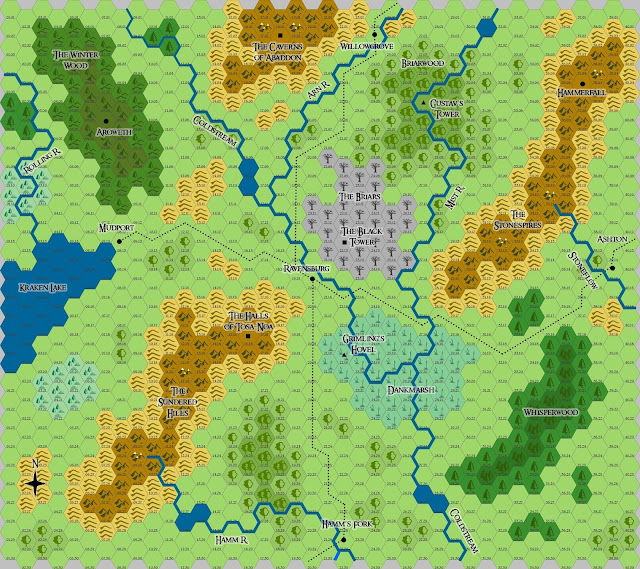 At 40 hexes x 30 hexes, the sandbox map is just slightly smaller than Avalon Hill's Outdoor Survival map (which was something like 43 x 34). Basically I want now to start thinking up ways of integrating the sandbox and the dungeon below the Black Tower (something like NPCs and/or factions who have agendas simultaneously in and out of the dungeon, so players will have reasons to adventure in both underground and in the wilderness. I was sort of doing this already with the city of Ravensburg and the dungeon, so this would just be an expansion.

Creating a House-Ruled Reference Sheet for OD&D. For this I got inspired by the Zenopus Archives blog, where the author has posted some cool reference sheets for Holmes Basic D&D. So I tried my hand as something similar for the original three booklets, plus my own houserules. I left off the aerial combat and naval combat rules (which I've never needed), and ended up with an 8-page set of reference sheets that contain everything I ever use: character creation, equipment and advancement (2 pages), all magic-user spells, distilled (2 pages), all cleric spells, distilled (1 page), combat, turning, and saving throw tables (1 page), dungeon adventuring, encounters and post-adventure (1 page), wilderness adventuring (1 page). The pages look like this: 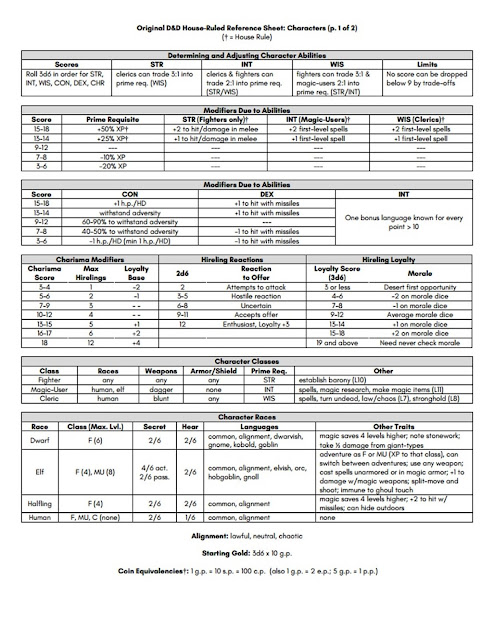 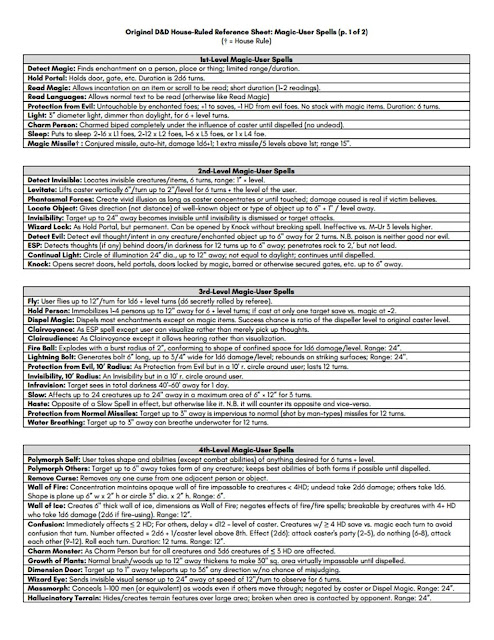 The documents are in 9-point font which is surprisingly still readable when printed out, even with my tired old eyes.

And just for fun. Just to entertain myself today I made a new banner for the blog right before posting this. It was time for a change.

Next on my gaming to-do list. All the above was done over a period of months chipping a way a bit at a time, a few minutes here, a few minutes there. With summer break finally here, I'm hoping to get some chunks of meaningful prep time. First I want to go back and organize my notes on NPCs and areas the Wednesday night group have interacted with to date. Then the next step is to start fleshing out some more NPC and monster agendas that will link dungeon to wilderness -- things like monsters in the dungeon with NPC allies in the wilderness, monsters/NPCs who have multiple bases both underground and in the wilds, items or allies somewhere in the wilderness needed to defeat threats from the dungeon and vice-versa, etc.

With luck I may be able to run a session or two of Ravensburg by middle to end of July.