I haven't posted since back in June, but I am still alive and kicking. While my limited hobby schedule hasn't left much time for blogging, I am still playing. Hopefully I'll get back to more regular posting when this semester is over! At any rate here's an update on activities along with some photos:

Swords and Wizardry with the Missus

Yep, still playing our Swords & Wizardry game. My wife's character, Olivia, is currently pursuing the last of the big boss villains across a heavily-modified version of the Isle of Dread. 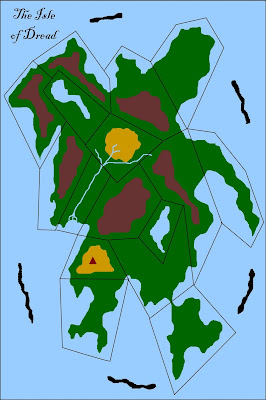 Modified Isle of Dread as an area movement map.

She and her henchmen have just entered an old temple on the island's central plateau, and passed
through a puzzle-trapped door to the first level. Having captured and interrogated a stray cultist from the group she is pursuing, she knows her quarry entered the temple ahead of her, and that she should be able to find them on a level below.

Apparently my adventures are really stressful (I had no idea). This picture from my wife's adventure journal says it all: 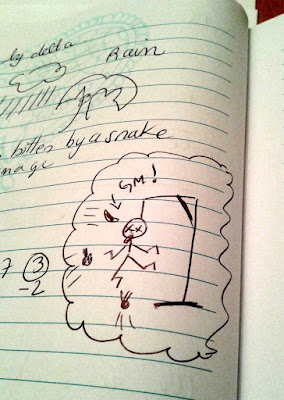 Yes, that's me hanging from a gibbet with fruit being thrown at me.

The Wednesday night group is still going strong. We finished my Black Hack adventure (some time ago), and have dived back into +Ken H's Montporte megadungeon using the Bloody Basic rules. After several years (in real time) of adventuring, we finally figured out a great mystery of the first dungeon level of Montporte. Yes, the place is that big and, yes, we are that slow at collecting and making sense of the clues. On the other hand, we've set up a trade deal in the dungeon and now have a small army of hirelings. Our hireling merchant, along with a captain and about a dozen soldiers and torchbearers will take care of the trade for us, while we go about the less mundane affair of exploring deeper into the dungeon.

When my wife and I began playing our weekly game, we got tired of pulling out all the materials and putting them away at the start and end of each session. So we cannibalized my 6' x 4' miniatures table in the basement and made it a permanent game table where we could leave everything set up. 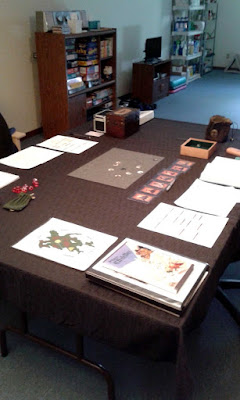 Of course, I eventually wanted to play with my toys again, so we bought two new 4' x 4' tables to replace the old 6' x 4' one and now we have both a permanent RPG table and a minis gaming table for me. Since I pretty much just do skirmishes or Neil Thomas' One-Hour Wargames (OHW) nowadays, a 4' x 4' table is all I need. 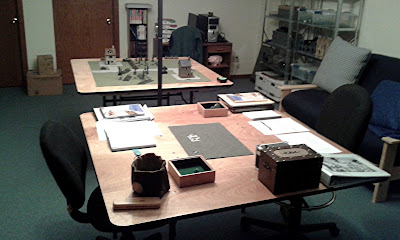 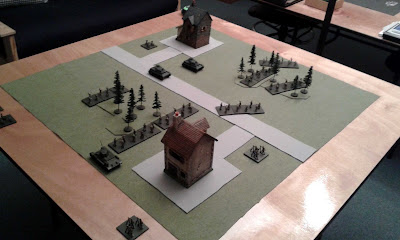 Currently on the minis table are some newly painted WWII Germans and Russians. I've turned painting simple monochrome uniforms into a quick and dirty science (using a process I got off Youtube). Spray the whole mini black. Let it dry. Then lightly spray the uniform color straight down from above, leaving shadows in the nooks and crannies. Detail with flesh, gunmetal, black and brown, spray with an overcoat, and they're good to go. Just have to do one more Russian tank and some ATGs for both sides, and I'll have a full set for use with OHW.

Finally, I did get in a quick ACW game using the OHW rules, set up on my desk in my study. I did this using some 54mm Britains Super Deetail pre-painted soldiers. The Union won by a hair. No battle report, but a couple of photos: 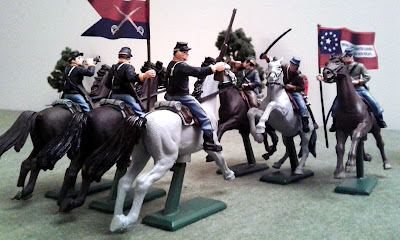 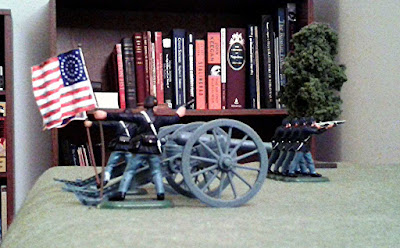