We had our first PC fatality last night in Rob's D&D 5E campaign. One of our mages, Squirrel, went back to check out a room we had previously cleared, and the rest of us went separate ways as well. When our enemies attacked again, Squirrel was set upon by multiple foes. He rolled poorly for initiative, the enemy rolled well. The bad guys went first. They made good attack rolls. Squirrel took multiple hits. The villains rolled well for damage. Squirrel had a crap CON score resulting in low hit points to begin with, so he dropped like a sack of potatoes. Squirrel then proceeded to throw three failed death saves in a row and he croaked. So why did Squirrel die?

Squirrel died because he was alone.

Or, in other words, we – the rest of the party – killed him. Where was Vognur, my fighter, while Squirrel was being cut down? I was more than a full dash move away north of Squirrel's position. Where was everyone else? I don't know. I should know, but I don't.* I was alone when I heard Squirrel scream. And when I did hear the scream, I was the first to arrive at Squirrel's position. So everyone else was at least as far away from him as I was, if not further.

This is not a new lesson. 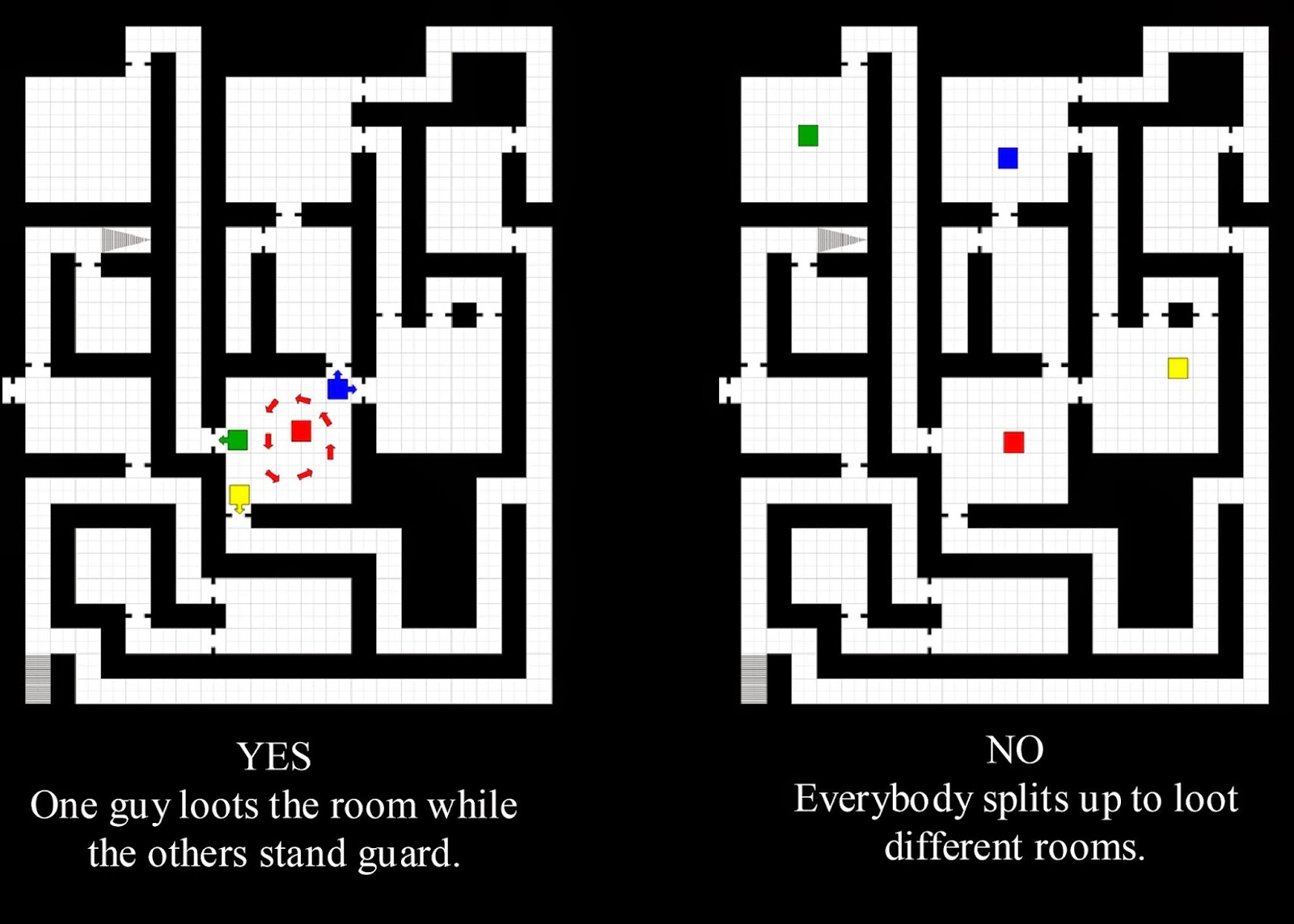 But the rule is hard to stick to sometimes, even for us veteran players. We get lazy. We get impatient. It seems so restrictive, trying to go methodically through the dungeon. It can sometimes be boring to have most of the party simply standing guard keeping watch down empty corridors, while one character gets the fun job of looting the room. And as players we're tired. We had a long, tough day at work. It's late in the evening. So we get lax. "I'll check this room, you go check that one."

And then Squirrel dies.

The dice rolls certainly didn't help. Squirrel's low HP total wasn't an asset either. And it's admittedly true that if we'd all been together, he still could have been killed. That's always a possibility in any circumstance.

But if the party had stayed together, Squirrel's chances would have been far, far better. He wouldn't have been outnumbered. It's probable that at least one of us would have had initiative over the bad guys. It's likely that one of us – with better armor and HP – would have positioned himself between Squirrel and the enemy. The enemy's attacks would probably have been spread out across the party, instead of all being directed at Squirrel. And who knows? One of us might have killed off one of the foes before they got a chance to attack. And even if Squirrel had still gone down, with the whole party there, we could have immediately tried to stabilize him.**

NOTES
*We use dynamic lighting and LOS in Roll20, so when a party member leaves your LOS, you have no idea where he is.
**In the event we did manage an attempt to stabilize him, but not until he'd already failed two death saves. And the one and only medecine check failed.