The Wastes of Ephemera


– From The Lay of the Cindarrin

The empire of Ephemera covered the globe. Her kindred races – men, elves, dwarves and halflings – built castles, towns, and roads throughout the known lands. Ruling over everything, the Ephemerans gave their name to the world itself.

When the great chasms opened, the Abominari – "hordes of the Abyss" – came forth to overrun the empire and cloak the world in darkness.

The lords of Ephemera could not stem the evil tide.

In desperation, the empire's most powerful wizards called forth Armageddon to defeat the Abominari, though it would extinguish their reign in the process. Better to destroy nearly all of existence, than to let corruption devour it. 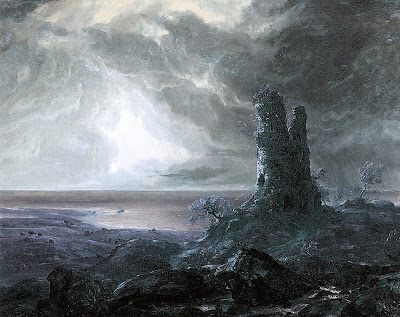 The armies of the Abyss were broken and scattered. The greater part of the kindred were slain. Cities were cast into rubble and ruin. The land, sea, and sky of Ephemera were altered beyond recognition.

Ephemera has become an endless wilderness where life is solitary, brutish, and short. The kindred struggle to rebuild, to repopulate, to recover what was lost, one isolated hamlet at a time.

The Cindarrin – "those who step from the ashes" – are remnants and descendants of the lost lords of Ephemera. In small bands they wander the wastes, extinguishing pockets of Abominari, helping kindred rebuild, and unearthing artifacts and treasures that are the empire's heritage.

Just a thought for a campaign setting. Something flexible, I think, that might lend itself for use as a backdrop for one-shots, a sporadic campaign, or maybe even regular play. With no wide-ranging infrastructure, it'd probably be easy to just plunk a one-shot or short campaign in there practically at a whim, whenever the mood hits. The PC's would be Cindarrin, of course.

The lines from The Lay of the Cindarrin are adapted from Diderot's Jacques le Fataliste et son maître.

The description of the current state of the Ephemeral Wastes is adapted from Thomas Hobbes' Leviathan.