I ran a filler session set in Ephemera for the Monday Night Ubergoobers this week, since Ken (Rusty Battleaxe) was unavailable to run his Montporte Megadungeon.  It was a bit nerve-wracking since, although I recently ran a play-by-blog game, I hadn't GM'd a real-time game (virtual or tabletop) in over 20 years. All in all, it went fairly smoothly (I think). At any rate I didn't implode. The only glitch was . . . a TPK.

The fact that were only two PCs (we usually have four in our games), and some really unlucky die rolls combined to make that happen.

Our duo of Cindarrin protagonists were Bo, a human fighter (played by Rob, Bat in the Attic) and Sidwin Butterbottom, a halfling thief (played by Tim, Gothridge Manor).

The heroes entered the village of Alden where they encountered two main inhabitants, Brill, a most welcoming and friendly village chief, and Lana, a huntress with a bad attitude. 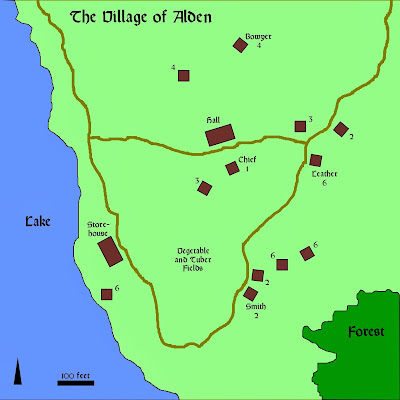 1. Unseasonable cold weather, blowing in continually off the adjacent lake, is destroying the village's crops.
2. Two villagers have recently disappeared in the middle of the night.
A. One, Old Man Holt, vanished one night without anyone seeing what happened. A patch of blood, Holt's walking stick, and some footprints were found on the road northeast of the village.
B. The second, Ryan, a young peg-legged fisherman, was seen fleeing in terror one night by Lana. He ran off to his boat on the east bank of the lake, set sail and was gone, not to be seen again.

Bo and Sidwin decide to go after Old Man Holt, up the north road. On the way they see crude road signs with rough inscriptions on them such as: 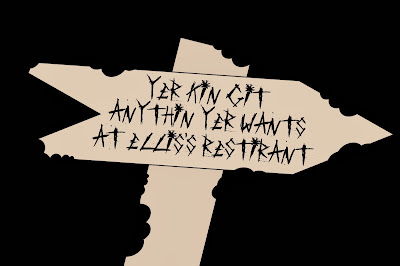 or: "Ellis's restirant, too myles" and so forth. They spot further patches of blood. Bo and Sidwin make their way to an old dilapidated building, bearing a crooked sign saying "Ellis's Restirant."

Peering through the front door and windows, they see a large dining area with place settings and fresh skeletons seated at the tables, many with their faces plopped down in their plates. Blood is splattered all over the walls and furniture.

Against the back wall, they see a large wooden board on which is written: 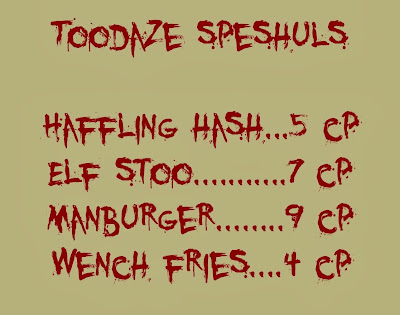 "This is just not right!" exclaims Bo.

"What? All they could come up with for my kin was hash?" complains Sidwin.

From a back room, beyond the dining area, a deep gruff voice is heard singing off key "Yer kin git anythin' yer wants, at Ellis's restiront..."

The two Cindarrin slip around the back to see if there is a less obvious way in.

They peer into a rear window and see a kitchen, complete with meat grinder – in use – and two ugly looking dwarves and a dwarf minotaur (like a normal minotaur, only smaller) – the latter wearing a chef's hat and singing the song Bo and Sidwin heard earlier.

Bo lifts Sidwin up onto the low dilapidated roof, so that he can peer down into the other rooms without windows. After that recon, they proceed to take a trap door into the basement, and see what's there.

In the basement the heroes find a killing room – with meat hooks, and Old Man Holt's body hanging half butchered from one of them – where they make quick work of two dwarves in blood soaked aprons and wielding meat cleavers.

After exploring the remainder of the basement, and finding a chilling room (filled with sawdust, ice blocks, and various cuts of demi-human meat), Bo and Sidwin concoct a plan to set the back of the building on fire, forcing the bad guys out the front door, where they will wait in ambush.

It starts off well. The back of the restaurant goes up like a tinder box. The dwarf minotaur and his two sous-chefs race out the front door into Bo's and Sidwin's kill zone.

And then the dice start rolling.

In the first round, Bo and Sidwin score two hits on the dwarf minotaur. After that it all goes to hell. The dwarf minotaur attacks Bo, the fighter, while the two dwarves go after Sidwin. Sidwin quickly goes down dead. Bo manages to score one more hit on the dwarf minotaur before the dwarves come over, gang up on him three-to-one with their boss, and drop him as well. OMG. TPK. RIP.

In the end, Ellis the dwarf minotaur is severely wounded, but still alive. However his restaurant burns to the ground.

Two days later, when a new pair of Cindarrin arrive in Alden village, no further villagers will have disappeared.

So. Out come the back-up PCs. Take two.

Egbert and Conner, both Cindarrin magic-users, along with a pair of Wanderers they had picked up as hirelings, stride into Alden.

They too meet with Brill and Lana (the village chief and the huntress), who are surprised to see two more Cindarrin only days after the first two had come and gone. Egbert and Conner engage the services of Ollie, a fisherman and friend of the peg-leg Ryan who had – several days before – disappeared at night onto the lake, fleeing something that chased him out of the village. The same lake that seems to be the source of the unseasonably cold weather and snow squalls destroying the village's crops.

Ollie takes Egbert and Conner out to the snow and ice-covered island in the middle of the lake, where they find Ryan's boat, a cave, and the remains of an old watch-tower on the top of the hill in the center of the island.

After examining Ryan's boat, the two Cindarrin make their way to the cave, where they find signs of a struggle and a peg-leg.

Egbert and Conner enter the tunnel, which they find illuminated at regular intervals. They also find treacherous patches of ice and some very unstable looking, large, sharp icicles hanging from the ceiling.

The Cindarrin have their man-at-arms out in front, tapping icicles with his spear to ensure that any loose ones fall in front of the party and not on anyone's head. A wise precaution as one almost immediately does so.

They avoid one room inhabited by several Frost Goblins (like normal goblins, only cold and with pale blue-white skin), then make their way into a sort of antechamber.

The antechamber contains a mural depicting a beautiful majestic woman, with a butterfly fluttering on her fingertip, and piles of corpses in grotesque death poses at her feet. A legend at the bottom of the mural reads: "Behold the beauty of Glacia, and despair."

In the next room further on, the small party discover a large room with a tall statue of the same woman, with the butterfly and the grotesque corpses at her feet, and the name "GLACIA" carved at the base.

John, the hireling, pries four pale blue gems – that seem to glitter with a snowflake-like reflection of the ambient light – out of the room's walls. And there we suspended further exploration and called it a night.