Last night the intrepid party of Cindarrin made their way further into the frozen dungeons beneath the keep on Alden Lake, in search of Ryan, the peg-legged fisherman who had disappeared. The party consisted of three human magic-users – Egbert (Rob), Conner (Tim) and Darius (Ken) – and two fighters Sandy (Dan), a dwarf, and John the Rotund (NPC Hireling in Egbert's employ).

The party pick up off where they left off previously, in a room that looks like a shrine. In the center of the space is a large stone statue, about 12' high. On the statue's base is engraved the name GLACIA. The statue is carved of pale white stone and represents a beautiful, majestic woman with a large butterfly fluttering on her outstretched finger, and corpses in grotesque death-poses at her feet.

The statue, her pose, the butterfly and the corpses all resemble the mural the party had seen previously beneath which had been inscribed: "Behold the beauty of Glacia, and despair."

The heroes pass into a room whose shelves are lined with jars and bottles of various powders and chemicals, which Conner identifies as being substances used in death magic. There are also eight jars containing large black butterflies, and one final jar filled with a powdered blue dye.

On approach to the next room, the adventurers spy an inscribed plaque on the closed door that reads "Before you sink into the big sleep, you shall hear the scream of the butterfly" (Aside: thank you, Jim Morrison). Tacked to the door is a scrap of parchment that reads, in crude scrawl, "Keap owt er dye."

The party rig up a long line attached to the door handle, move all the way back into the last room and around the corner and pull it open. When nothing happens, they cautiously move up and enter the room.

Inside is a stone altar upon which rest a scroll and a large glass bell jar. The scroll relates, in ominous, biblical language, the story of a deity named Glacia, goddess of winter and death. The scripture tells of her pet butterflies, whose screaming cries bring death with them when released upon the world. Within the bell jar next to the scroll is a beautiful butterfly with ice-blue wings, matching the color of the dye in the alchemical store room, opened in a 12-inch span. The butterfly does not move, but rests suspended, hovering somehow, inside the bell jar.

After some discussion, the group decides to not tamper with the jar, but to seek more info, and maybe find a way to take it or use it later.

Leaving the butterfly room behind, the party makes its way to the barracks room of the Frost Goblin Guard (an elite squad of last session's Frost Goblins), and encounter three of them there. Darius successfully charms one, leading him out into the hallway, while the other party members made easy work of the remaining two who are quite confused. The party concocts a story of the dead goblins' infidelity to Glacia to feed to Tub, the charmed Goblin, when he reenters the room with Darius. Tub understands that the infidels had to be punished. He tells the party more about Glacia, about Grix, who commands this place, and of the high priest Agoth. He also mentions that nasty "spy from the village" who is being held for questioning in a cell north of the Frost Goblin Guard barracks.

The party move north, led by Tub and, after passing through a torture chamber, find a bloody, beaten and battered Ryan, sans peg-leg, and concoct another story, telling Tub that the spy needs to be taken outside the complex to be "sacrificed properly." Tub is convinced, and the adventurers make their way out the way they came in, with the torchbearer helping Ryan to hobble along.

Once outside Egbert turns to Tub: "So, did you bring the ceremonial knife?" Tub has no idea what Egbert is talking about. So Egbert continues the ruse: "We'll have to go back in and get it from Grix and Agoth."

The party takes Tub back into the complex, leaving Ryan to hide in the rocks outside (also having picked up and put on his peg leg at the entrance where they had found it previously).

The group encounters Grix – a minor frost demon – in his throne room, who is furious that a member of his Frost Goblin Guard has brought a band of Cindarrin into his chamber. A sleep spell from Egbert takes down Grix (and Tub, too). Grix's throne is intensely cold – it's almost painful even to approach it.

Sandy takes out a crowbar, carefully wraps his hands to shield them from the cold, and give the throne a whack with it. The bar is instantly frozen to the throne, stuck hard there, and ice quickly begins to coat it running up toward Sandy's hands. Sandy lets go in time, and the ice soon covers the bar, which then shatters and falls to the floor in frozen chunks.

Sandy takes out a blade he picked up in the torture chamber and hacks at Grix's neck. The Frost Demon's head comes off, but only just as the blade is frozen, like the crowbar, and it too breaks at the end of the cut.

Sandy runs through a couple more spare knives taking off Grix's horns and claws, which Egbert successfully identified as being usable as magic components, noting that the body is starting to warm up, as the last blade doesn't break. The party carefully wrap the hands and horns in thick cloth which initially frosts up, but gradually just gets wet as the dead Demon parts get warmer.

The party dispose of Grix's body by pushing it onto the throne. Now that he is dead, his corpse is no longer in sympathy with the chill of the throne and the corpse too freezes and shatters. Darius wakes Tub the Goblin – again with a story of Grix's infidelity to the goddess Glacia, resulting in the Frost Demon's destruction – and the party move on to "ask Agoth the High Priest if he has the ceremonial dagger for Ryan's sacrifice."

Tub leads on to Agoth's room, where Conner quickly charms the surprised High Priest of Glacia. Agoth quickly and eagerly explains to his new best friend his and Grix's plan to bring back the butterflies and summon Glacia into the world.

Having heard enough, Conner slowly and carefully pulls out his dagger, intending to stab the charmed High Priest in the back.

Pause. Time for game mechanics. Agoth is charmed. Conner is standing behind him. So I tell Tim to roll a d20, and anything other than a "1" will hit. Tim throws the (virtual) die. The result: Natural 1! And there was much howling and laughter to be had by all. Happens to all of us.

So, Conner misses his surprise back stab attack against a charmed guy who thinks Conner is his best friend. The High Priest leaps away and bobs and weaves as the rest of the party now jumps to the attack, nearly everyone missing (except Darius who does 1 point of damage).

Next round, everyone misses, Agoth hits John the Rotund (Fighter Hireling) with Cause Light Wounds, dropping him unconscious. Alfred the torchbearer manages to get to him before he dies and stops the bleeding. Finally, the party takes Agoth down.

A search of Agoth's chamber yields, apart from some mundane loot, one item that may well prove invaluable to the party – a recent, post-Armageddon, survey map composed by one Brom the Traveller, which roughs out the basic terrain and major inhabitants of the various parts of post-apocalypse Ephemera. 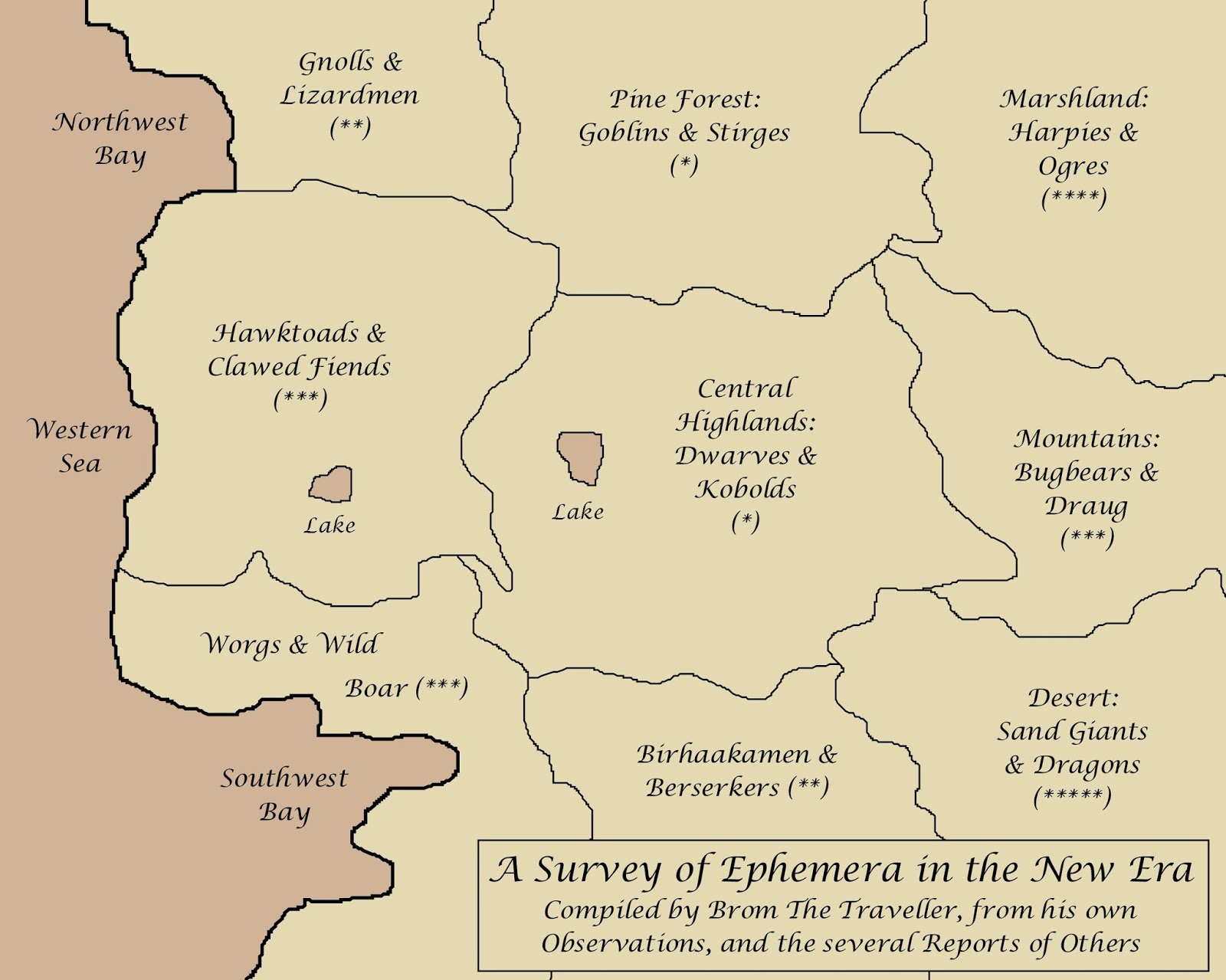 And with that, we called it a night.