Life in the villages of Ephemera is hard. Farmers, hunters, and fishermen toil their day away. In many hamlets cold, hunger and deprivation are a way of life. Some young men and women see life in the villages as a hopeless dead end, and leave. These are the wanderers. 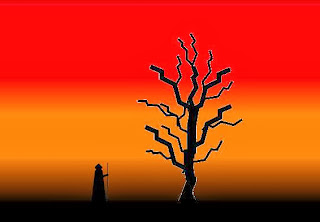 They travel the wild wastes of Ephemera, making their living as best they can, hoping to end their misery either by finding something better, or by finding a quick demise. At least on the broken remnants of imperial high roads, they have hope.

They are frequently scorned in other villages, and at best tolerated. Some turn to crime. Most of them don't live long past twenty. Some survive by forming into bands of brigands. The strongest may even become powerful enough to turn themselves into local warlords.

But the most fortunate wanderers of all are those who encounter a Cindarrin early on. The wanderers make excellent hirelings, as torchbearers, porters, and men-at-arms. And despite the perils of the job, those in the employ of the Cindarrin ultimately have the highest survival rate of all.