SONG OF BLADES AND HEROES Scenario: Counterattack at Synnaeth

Background: Though the skirmishes at Undin Wood and Ristyp went poorly for the orc invaders, at many other points on the frontier the orcs succeeded in gaining ground and capturing human villages. One such place was the village of Synnaeth. The orcs had taken the village, killing, driving off, or enslaving the civilian population, and turning the hamlet into an orc outpost. A nearby watchtower, however, overlooking the outlying fields and farmsteads of Synnaeth, remained in the hands of the humans. 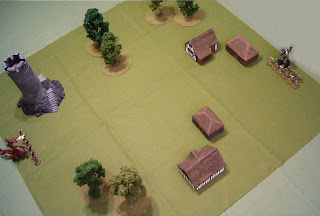 Captain Burris, commander of the watchtower garrison, received orders to launch a counterattack into the village of Synnaeth against its foul occupiers. The messenger carrying the orders had flown in on the back of a young dragon named Mynnoth, who had been tamed and trained by the Magician Imbal the Wise. Mynnoth and Imbal were to join Captain Burris' attack against the orcs in Synnaeth village. The orcs, for their part, were led by Pog the Shield-Bearer [game note: proxy for a SBH orc standard bearer] and supported by a rather large troll named Maggr. 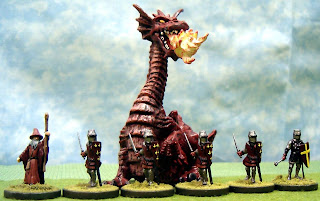 The Dragon is a pre-painted toy by PAPO.
The Orc Warband: 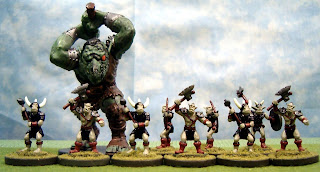 The Troll is a pre-painted D&D Miniature.
The Battlefield: The battlefield is a 3' x 3' surface, set up as per the diagram (colors reflect board areas important for victory purposes). 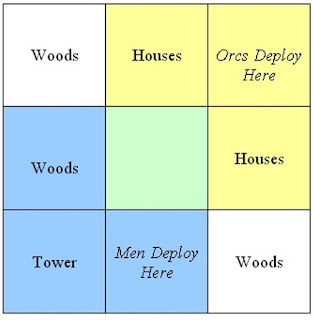 Victory: For the men to win, they must clear the green and yellow sectors of orcs. For the orcs to win, they must outnumber the men in the blue and green sectors by a ratio of 3:1. As soon as either of these conditions is met, the game ends instantly, and the side that met its victory condition wins.
Posted by Chris C. at 10:59 PM

Email ThisBlogThis!Share to TwitterShare to FacebookShare to Pinterest
Labels: Scenario, Song of Blades and Heroes